Last evening, about 11 o’clock, a somewhat eccentric and very boisterous woman, known to newspaper men as “the Orange lady,” and who will be remembered for the dispute ending in blows, which she had with “a Catholic female” on the 12th of July, 1878, made her reappearance as a public character of St. Monique street, where she caused a crowd to assemble, owing to her disorderly conduct and profane language, to which she added expressions anything but complimentary to Catholics. She was taken in charge of by a volunteer, whose offer of escort was readily accepted by the excited “lady.” 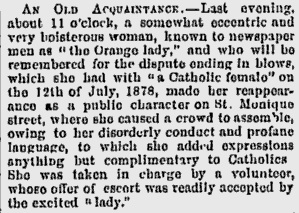 A respectable character no more

Snowballing – The Montreal Gazette Mar. 27, 1878 The late fall of snow has been a providential source of amusement…