Last night while a respectable resident of St. Gabriel Village named Robidoux, was on his knees in his house saying his prayers, a young man named John Leonard entered, and asked if he knew where a man named Christian lived. Robidoux replied he did not whereupon Leonard left. Robidoux continued some time longer at his prayers and on rising at once missed his watch which he had hung over the sofa, and immediately communicated with Sergant Degan, of the St. Gabriel police, who arrested Leonard. The watch not being found on him, his mother was questioned, and being closely pressed, finally produced it from her dress, where she had carefully hidden it. Both mother and son were this morning arraigned before Mr. McKeown, J.P., and fully committed to stand their trial at this Quarter Sessions. The woman has always hitherto borne a respectable character. 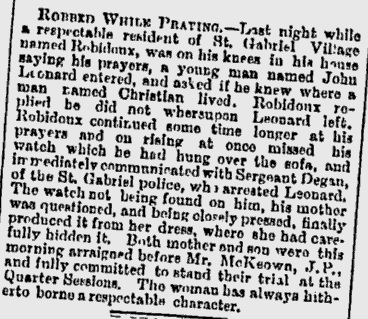 The First of April – The Montreal Gazette Apr. 1, 1878 Beware of sells Take care how you open express…