The late fall of snow has been a providential source of amusement to the juvenile fraternity of the city. Yesterday afternoon, a woman walking along Lagauchetiere street was hit by a snowball on the right temple. It caused her to stagger up against an adjoining wall, but fortunately no serious damage was sustained, she recovering in a few moments. It is needless to say that the snowball was not intended for her, a party of boys and girls amusing themselves just as she was passing; however, on observing the accident alluded to, they mysteriously disappeared, and the offending party could not be discovered. The ball in itself was no despicable object, as, from the soft state of the snow, it had attained the hardness and weight of iron. This amusement, although conducive to the recreation of the youth of Montreal, is, to say the very least, reprehensible, especially when practised in our public thoroughfares. 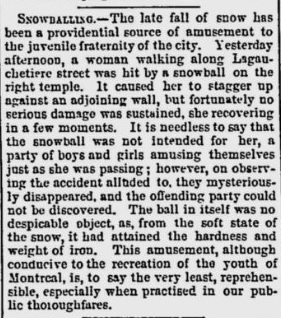