Jane Lamont, a widow woman of Scotch birth, is a confirmed drunkard, as stated by the Police. She resides on Chaboillez street, and when filled with the “Curse of Canada,” becomes a perfect nuisance in the neighbourhood, so much so that the respectable residents in the vicinity apply to the police for her incarceration. It appears that she is maintained by some friends in her native country, who supply her with the necessary funds wherewith to live and get drunk. Every cent is squandered on liquor, and the poor unfortunate is periodically on the verge of delirium tremens. Yesterday she was a prisoner in the Chaboillez Square station, and so low was her condition that Dr. Leprohon had to be called in. A medical inspection showed that the woman was in no immediate danger, and she was not removed from the cell. 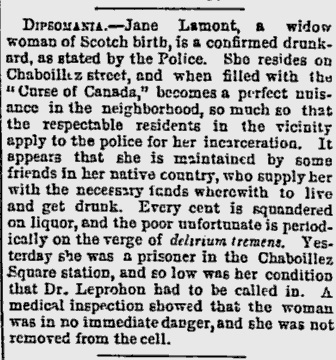 An arrest by the chief – The Montreal Daily Post Sep. 14, 1886 Yesterday afternoon the Chief of Police* was…

The Lion Objected – The Montreal Gazette Sep. 1, 1891 Mr. Lowlow, the equestrian director of the Robinson circus, had…