Yesterday afternoon the Chief of Police* was passing along Mignonne street, when he was accosted by a man named Therrien, who pointed to three men walking hurriedly along the opposite side of the street, and said they had just waylaid a man and stolen his watch. The chief gave chase and succeeded in arresting one of them, George Gauthier, aged 19, residing on Visitation Street. Mr. Paradis afterwards met Constable Lessard and informed him of the affair, and the officer subsequently arrested George Massie, aged 21, residing on Beaudry street. The watch was found in Gauthier’s possession. The prisoners appeared before the police magistrate this morning and pleaded not guilty. As there is no claimant for the watch the prisoners will be arraigned on a charge of vagrancy tomorrow morning. 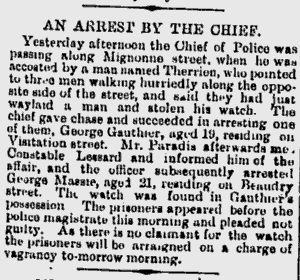 Ed’s note: Chief of Police from 1879-1888 was Hercule Paradis. Photo courtesy of the McCord Museum – who have a great photo archive available online. 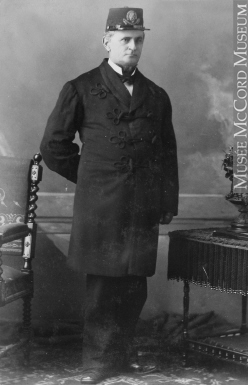 Smallpox strikes down a man in Griffintown