Mr. Lowlow, the equestrian director of the Robinson circus, had a narrow escape yesterday morning, if not of his life, at least from serious injury. The two lion cages were passing him side by side on their way to take up their position in the parade, when the lions took to fighting. Mr. Lowlow attempted to separate them, when the Nubian one, an immense beast, grabbed him with one paw and drew him up against one side of the cage, striking him with the other paw, inflicting several severe scalp wounds and slightly wounding him in the face. A doctor was called, and after examination pronounced the wounds were not dangerous, providing crysipelas did not set in. 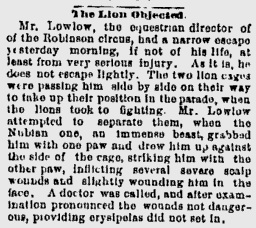 Ed's note: I did some reading up on Mr. Lowlow and found his profile on "circushistory.org". Here it is in full along with his portrait:

LOWLOW, JOHN. (August 9, 1841-October 18, 1910) Clown, acrobat. Born in Atlanta, GA. Ran away from home at 16 years of age when his father, a schooner captain, was lost at sea. Entered the circus profession as a candy butcher with John Robinson’s and spent his career on the show, working for “Uncle John,” his sons and his grandsons. Robinson & Lake as early as 1858. An accident forced retirement as an acrobat, so he took to clowning and was an instantaneous success, becoming one of the last of old school talking jesters, particularly popular in the South. On making an entrance into the arena, his familiar shout was “Bring in another horse!” From 1886 through 1893, was Robinson’s equestrian director as well. In later years, worked as a press representative for the show. A last reference listed him in charge of the front door, John Robinson’s (John G. Robinson, proprietor), 1900. May have worked with a partner named Johnson in a balancing act, G. M. Eldred & Co., 1859. Lake & Co.’s Circus (Lake and Norton, proprietors), 1863-65; Lake’s Hippolympiad, 1866; Yankee Robinson’s, Chicago, fall 1866; John Robinson’s, 1868; P. T. Barnum’s, 1876; Cooper, Bailey & Co., 1879; Tucker’s Giant Shows, 1895; equestrian director, Walter L. Main’s, 1896. His savings over the years was vastly depleted by unfortunate speculation. Died at age 69. 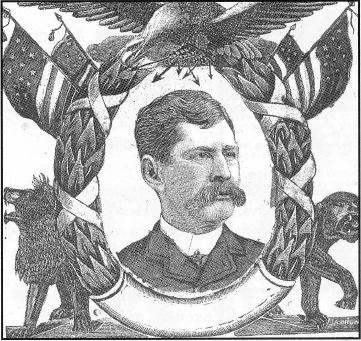 Can't be buried on a Sunday

Funerals – The Montreal Daily Witness Sep. 4, 1874 It is a breach of good taste which prevails here perhaps…