A woman named Mary Ann Dwyer, residing at 59 Colborne street, was occupied whitewashing a room in her house yesterday morning, when she overthrew a lighted lamp, which exploded and set fire to her clothing. Notwithstanding her desperate efforts and the assistance of friends, who rushed to her assistance, she was terribly burned and fell fainting to the floor. The house was set on fire but the prompt action of the men from No. 3 station soon extinguished the flames. The poor woman was removed to the General Hospital in an ambulance, being attended to by Dr. Macdonald. She expired at half-past three o’clock in the afternoon in terrible agony. The coroner will hold an inquest this morning. 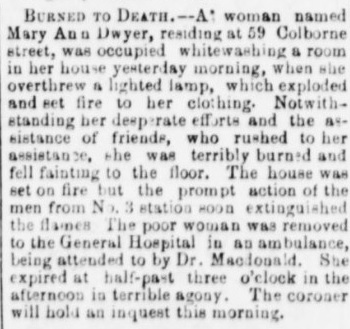 A park of ill repute