A disturbance took place at the corner of Nazareth and Ottawa streets yesterday evening at about 5 o’clock, between a Protestant and Roman Catholic Sunday School party, who happened to meet each other. It commenced by a snowballing contest between the boys, and was ultimately joined in by some of the Young Britons and sons of Erin. Pistol shots were discharged and it is supposed some parties were injured, but nothing definite is known. On the arrival of the police on the scene of action everything had quieted down. 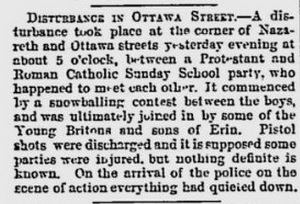 The Ice-Velocipede – Canadian Illustrated News – Feb 19, 1870 In a climate such as that of Canada, the velocipede can…