The weather has been for some weeks back so totally different, from that which we are accustomed to have in this part of the country at this season, that it has considerably affected the health of the inhabitants, colds, sore-throats, rheumatisms, and all the train of maladies engendered by a damp atmosphere, have seized a great portion of the population. Indeed, we understand, one of the more eminent of our medical practitioners has declared that at least three thousand persons have been taken ill within the last [few] days. At the moment, however, that we write, the weather is rapidly improving: an easterly wind seems to have dissipated the chill haze which enveloped us, and a warm sun is quickly melting the condensed snow and ice that covers our pavement. Now we experience the convenience of the sewers, not long ago constructed in this city; which drain off those pools of ice-water that formerly wetted the feet and affected the lungs of the people. The water pipes and sewers stand evidently foremost in the improvements that have been made in Montreal during the few last years. 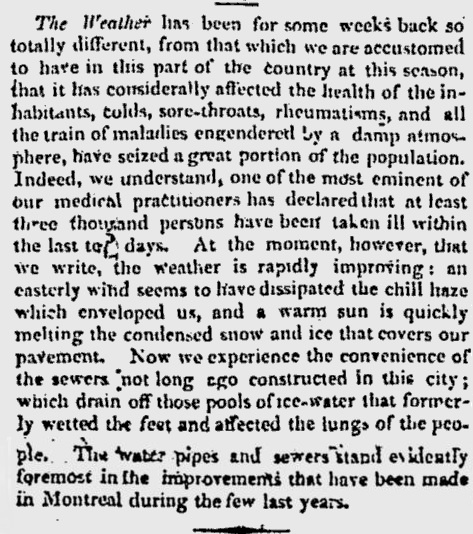 Careless Driving – The Montreal Daily Witness Mar. 2, 1868 A carter, in attempting to pass another vehicle, in Notre…