A young man named Arthur Bouchard, formerly a resident in Montreal, died very recently at St. Jacques, under very peculiar circumstances. He had arrived at the parish about three months ago, and pretended that he was deaf and dumb. A farmer named Fortin gave him employment, and he did his work most satisfactorily. He was a handsome man, and was greatly admired by the young girls of the neighbourhood, who often said in his presence how much they felt for him. He was pretty well educated, and could read and write. Being taken with a severe attack on the lungs, he was declared to be in danger by the Doctor, and a clergyman was sent for. To the great surprise of the latter, Bouchard acknowledge that he had only been pretending, and could speak perfectly well. He gradually grew worse, and when dying said that his parents lived at Arthabaska, but several telegrams were sent there without reply. He had been living at St. Hubert and for eight months had never spoken a word. 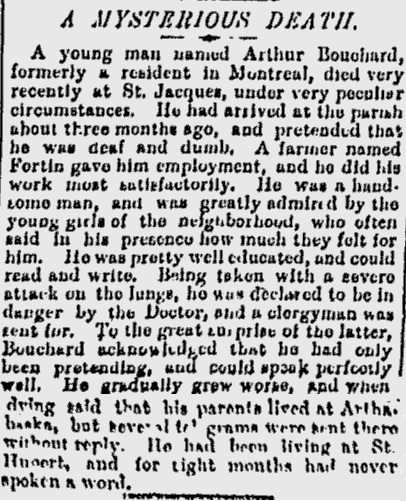 A light at the end of the gas lit tunnel

A new light – The Montreal Gazette, Mar. 13, 1880 Gas-lighting companies seem to be destined to no end of…

Weather – The Montreal Herald Mar. 5, 1825 The weather has been for some weeks back so totally different, from…