A carter, in attempting to pass another vehicle, in Notre Dame street, this afternoon, knocked down a poor old man, who is an inmate of the House of Refuge and a cripple. He received a severe wound on the head, which bled very profusely. He was kindly aided by W. A. Merry, Esq, and placed in the sleigh of Mr. John Fogarty, of Colborne street, who was passing, and who, with great care, conveyed the poor man to the General Hospital. Mr. Fogarty’s sleigh-robes were completely stained with blood. 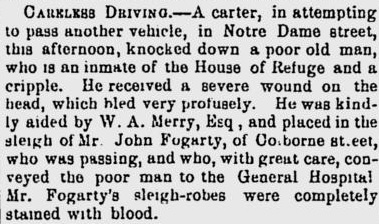 Weather – The Montreal Herald Mar. 5, 1825 The weather has been for some weeks back so totally different, from…

Dancing! – The Montreal Gazette Mar. 4, 1892 Prof. Durkee’s last beginners’ class of the season. This class will…