A protestant relative of a Catholic Archbishop – The Montreal Daily Witness, Sep. 30 1875

This morning the remains of Catherine McHale, widow of the late James Comber of this city, were interred in the Mount Royal Cemetery. She was a cousin of the noted Roman Catholic Archbishop McHale, of Tuam, Ireland. She died in Quebec, and had been for 14 years a member of the Church of England there, and the Presbyterian body here. She was a native of Killala, County Mayo, and was born and brought up a good Catholic. When she married, she changed her creed, and has ever since been a steadfast adherent of the Protestant faith. It was made known to many Roman Catholics in Quebec that she was related to the Archbishop, and they manifested some anxiety over her conversion. A year ago, having been taken ill, an Irish Catholic friend sent over a priest, who administered to her the Sacrament of Extreme Unction. She recovered, but during her late illness, did not see any spiritual advisors except Protestants, who state that within a day of her death, she expressed herself thoroughly reconciled, and that she experienced the peace of God. She leaves two daughters in Canada, one residing in this city and the other in Quebec. 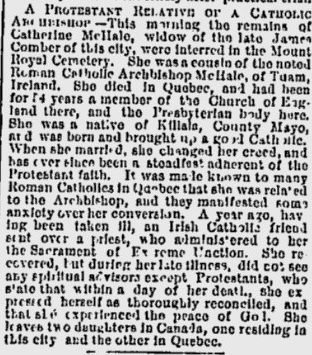 A police band – The Montreal Gazette Oct. 1, 1892 The police force of Montreal is to have a band…

Smallpox strikes down a man in Griffintown