The police force of Montreal is to have a band at last. The initial step was taken yesterday, after the matter had been discussed for weeks, and the officers and men have entered into the project with enthusiasm. Thirty men of the force, many of whom are something of musicians, were selected yesterday by Mr. Hardy, of the Harmony band, who will at once take them in hand. Before six months are over, he guarantees to have a first class “corps de musique.” Mr. Hardy will select the instruments for the men and these will be purchased by the Chief. The men will then be supplied and practice begun at once. Those interested state that the band will come in useful in cases of parades of the force, and it is also probable that outside engagements will be secured. 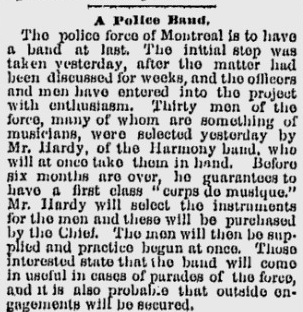 An ode to a fall dessert

Pumpkin Pie – The Montreal Daily Herald Oct. 5, 1892 When melancholy days comes round and leaves get brown and…

The unshaken faith of a protestant on her deathbed

A protestant relative of a Catholic Archbishop – The Montreal Daily Witness, Sep. 30 1875 This morning the remains of…