The patron saint of the Emerald Isle has been fortunate this year in securing such a bright seventeenth of March as does not come every year. This is the sort of day to inspire the wearers of the green with all their natural and national vivacity, and to drive away for the moment all those thoughts of Ireland’s wrongs which are fostered by gloomy weather on St. Patrick’s Day. Nobody can quarrel with the ancient custom of Irishmen in honoring St. Patrick. Although one legend declares that his mother kept a shebeen shop in the town Enniskillen, it is generally held that he was not really and Irishman, having been born either at Boulogne in France, or on the banks of Clyde in Scotland. Still, St. Andrew was a Jew and never was in Scotland, and St. George is always ascribed to Cappadocia. Ireland, on the other hand, has good reason to revere the name of the great missionary who did so much for that land. Whether he banished the snakes of not, we wish his memory would banish heartburnings, intemperance, and a few other modern vipers not yet altogether called off. 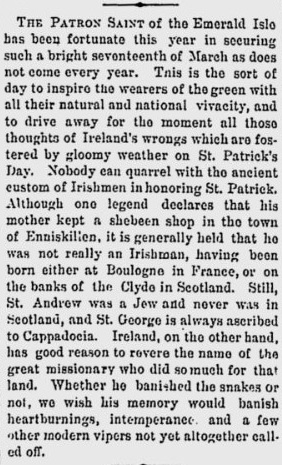 Snowballing – The Montreal Gazette Mar. 27, 1878 The late fall of snow has been a providential source of amusement…