Another poisoning case, which shows parents clearly the necessity of keeping out the reach of children all dangerous liquids, etc., occurred last evening, but which did not result fatally, thanks to the good and timely care of the house surgeon of the General Hospital. It appears that two children named Rawton, residing at No. 31 Dowd street, and whose ages are 18 months and 7 months respectively, while playing around the house, came across a belladonna plaster, which they immediately commenced to devour, imagining the glossy mixture to be “taffy.” The mother of the children afterwards became alarmed at their strange actions, and, seeing the remains of the plaster, conceived the cause of their convulsions. She instantly procured a sleigh and drove them to the General Hospital, where the physician soon afterwards restored the children. They have now completely recovered from their attack. 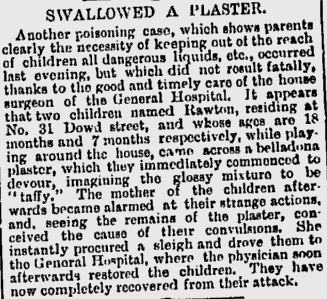 Untitled – Montreal Daily Witness Mar. 17, 1882 The patron saint of the Emerald Isle has been fortunate this year…

Skull-cracker assault on the street