A representative of the Herald in conversing with a large capitalist who came to this city from the States some years ago, bringing quite a large sum for investment, received from him the following statement regarding Montreal as a location for good paying investments. He remarked that he would choose Montreal as the best place for his purpose after looking at property in several other cities, and that after some ten years experience, having purchased both commercial, city and farm property, he was satisfied that his judgment was correct. The rate per cent realized was a very fair one, while the security is the best in the world. 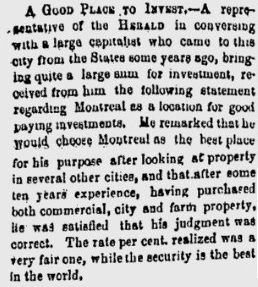 Foremen fistfight on the Canal

Sowing their wild oats – The Montreal Herald Jul. 15, 1889 Severin Majeau was discharged from the penitentiary in February.…