Severin Majeau was discharged from the penitentiary in February. He is said to have stolen four horses since then and was arrested recently at Yamachiche. While handcuffed he on Thursday jumped from the train near Three Rivers and escaped.

Jane Carey has been sent for trial charged with picking a wallet containing over $60 from the pocket of Mr. Joseph Montpetit, who was walking along the street at St. Henri Friday night. She resisted search violently and struck the police matron a savage blow. $61 was found hidden under her corset, in her stockings, etc. on her person. Margaret Al(?)sock and Peter Towley have been committed as accomplices.

A prepossessing young woman, named Maggie Murphy, 21 years of age, was on Saturday sent to jail for the fifth time for drunkenness. The Recorder sent her down for five months. She did not think this sufficient, as she asked the Recorder to “make it an even six.” 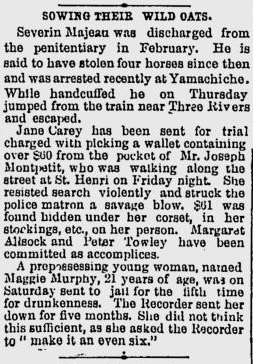 Get your wallets out

A good place to invest – The Montreal Herald Jul. 22, 1885 A representative of the Herald in conversing with…

Cold feet can be expensive

He was fickle minded – The Montreal Gazette Jul. 17, 1891 Messrs. Geurin & Feron, as lawyers for Miss Julia…