The report reached the city yesterday of a serious fire which occurred on Wednesday evening in the St. Vincent de Paul Penitentiary. It seems the flames were discovered just before the supper hour in that part of the prison occupied by the tailors and shoemakers. The prisoners were all hard at work at the time. No clue has been found to the origin of the blaze, but it is believed to have been incendiary. No prisoners escaped. The damage amounts to about $5,000. 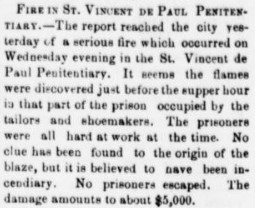 Cabby takes gents for a ride

Night Hawk Cabmen – The Montreal Gazette Apr. 18 1892 The number of night hawk cabmen in the city is…