The number of night hawk cabmen in the city is on the increase, and they are getting bolder every day. As far as carrying numbers on their doors is concerned, it is disregarded, while the drivers of the few cabs that have lamps do not light them. On Saturday night hardly a cab in the city had its lamps lit. The result was that the drivers could overcharge strangers with impunity, as their numbers could not be seen. A robbery by a carter and the “pal” occurred last week. The carter took two young men, in a prominent position in the city, to a house of ill-fame and tried to make them pay more than the fare. They refused, and the result was that the carter and “pal” simply searched the pockets of the young men and took all they wanted -- $6. The young men dare not complain to the police, as they would lose their positions and bring disgrace on their families if it were known what neighbourhood they were in at the time, four o’clock in the morning. 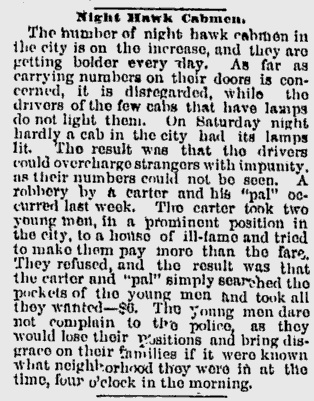 How they did it – The Montreal Gazette Apr. 23, 1884 A young American and his intended, the former a…