Last evening as two young men, named James Baker and John Riley, were returning from a Gospel-meeting in Desrivieres street, having stopped at the corner of St. George and Lagauchetiere streets to say “Good night,” they were asked by several young men, who had been standing at the opposite side and who crossed over, what time it was. On being told, they repeated the question, saying they did not believe the answer. They, however, went a little down the street, caught hold of a little boy and knocked him down, doubtless thinking that Baker and Riley would take his part and thus pick a quarrel; but this was not done and they moved down to Baker and Riley again, and in passing one of the cowardly scoundrels struck Baker a blow with a skull-cracker on the back of his head, making an ugly cut, and causing the blood to flow copiously. Baker at once ran off up St. George street, when his assailants fired five or six pistol shots after himself and his companion, who also had taken to his heels. Baker proceeded to the General Hospital, while Riley made for the Juror street station, where he gave information. Several policemen were soon on the spot, but nothing was to be seen of the would-be assassins. The wound in Baker’s head is about one inch deep, and said by the doctor to be of a very dangerous character. 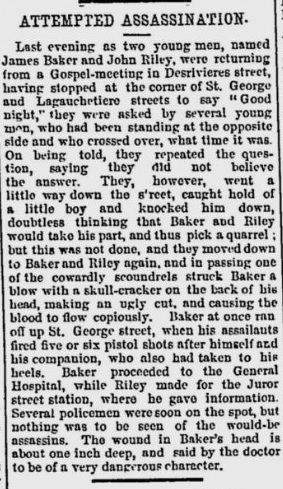 Montreal finds a friend in the sparrow

The Sparrow in Montreal – The Montreal Daily Witness, Mar. 11, 1875 We have had frequent communications, some for and…