On Friday a man named Henry Gauthier, a blacksmith, was arrested by the police for drunkenness, and lodged in Panet street station. After having been some time in the cells he managed to unfasten the door, and rushing into the street made his escape. The cells in this station would need looking to, as Gauthier is not the first person who has escaped from them. 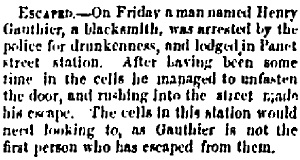 Injurious to health – The Montreal Gazette Jun. 1, 1891 The health authorities at St. Henri are taking action against…