A Detective Dodge Detected – The Montreal Daily Witness May, 7, 1868

About a fortnight ago, four bad characters, named respectively Ennis, Sterns, McDonald, and one whose name we forget, left Montreal and robbed the store of a Mr. Matthews, at Cornwall. They were pursued by the authorities, captured near the line, and lodged in the Cornwall jail, where they now lie. Last week a number of thieves pretending to be United States detectives, and as such requested to see the prisoners. Amongst these psudo-detective was Griffin, the notorious Royal Insurance bond robber. The jailer suspected the whole lot, however, and told them, if they would apply to the Chief of Police of Montreal, and get an order from him, they would be admitted to the Cornwall jail, not otherwise. They then left, but have not yet called on Mr. Chief of Police Penton. 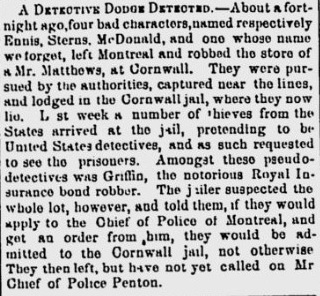 Reynard is caught and killed

You must be at least this tall...