At the meeting of the Police Committee yesterday, it was resolved to suspend action against small candy dealers charged with being open on Sunday and the matter of granting licenses for the sale of hay was referred to the City Attorney. After some discussion it was resolved to instruct the City Attorney to draft a by-law to allow candy and cigar shops to remain open during certain hours on Sunday. It was decided to have the members of the Police force examined by a medical man, that no man should in future be placed on the force who was not up to the standard height of 5 feet 8 inches and who did not present a medical certificate as to his physical condition. It was concluded not to appoint a drill inspector there being many men in the force who could perform that duty. 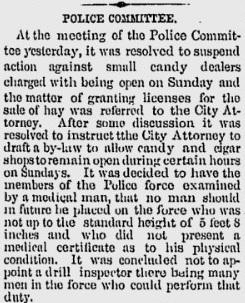 A Detective Dodge Detected – The Montreal Daily Witness May, 7, 1868 About a fortnight ago, four bad characters, named…