According to notice, a second Fox Hunt took place yesterday morning. The Fox was unbagged at the same place as on Saturday last, and afforded capital sport to the numerous equestrians who followed. About 40 horsemen were engaged in the exhilarating case and, we are informed Reynard afforded a good run of about an hour and a half. He was killed on the farm of Mr. Lanouette, and the brush became the trophy of Mr. George W. Yarker. The dogs were more numerous than on Saturday and behaved remarkably well, though many of them had never been out before. 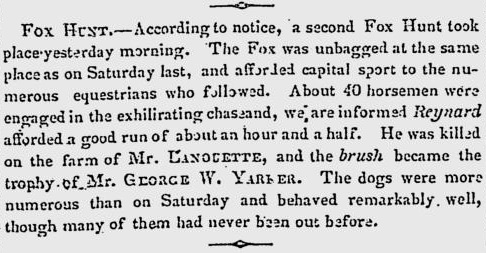 The amusements of Merry Old England

Fox Hunt – The Montreal Gazette May 5, 1828 To those who have enjoyed the chase, in the Mother Country,…

A Detective Dodge Detected – The Montreal Daily Witness May, 7, 1868 About a fortnight ago, four bad characters, named…