As Alfred Leblanc was walking along Craig street yesterday evening he observed an old man, evidently the worse for liquor, stumble and fall upon the sidewalk. Immediately after Leblanc had picked him up and started him on his way he saw something twinkling in the snow, and on going to see what it was he found that it was a watch and chain, evidently belonging to the old man. The finder took it to the Central Police station, and about an hour and a half afterwards an officer on duty on St. Paul street brought in a man whom he had arrested for being intoxicated, and who claimed that he had been robbed of his watch. On being questioned it appeared that this person was the same who had been picked up by Leblanc. He declined to give his name and was put in a cell until this morning. 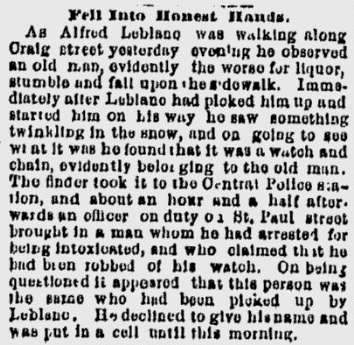