Yesterday a model for a monument which is proposed to erect to the memory of Jacques Cartier arrived at the City Hall. At the top of a square block are four steps, and at each corner of the uppermost are allegorical figures representing Navigation, Science, Agriculture and Fishing. Between these are four entablatures, the first showing the Indians looking with surprise at the approach of “La Grande Hermine;” the second representing the Indians rowing Jacques Cartier in a canoe; the third the famous navigator bearing a cross, and the fourth a procession in which the Indians are seen following the discoverer. Above the block is a pillar entwined with laurel leaves, and this is surmounted by a figure of Jacques Cartier, supported on the one side by an Indian warrior, and on the other by a female of his tribe. 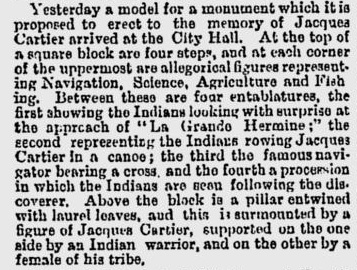 Ed’s Note: This was just one early proposal for a monument to Jacques Cartier. In the end a much different monument was installed in a Saint Henri park sometime between 1893 and 1895. The Saint Henri monument is different in design and includes a multi-tiered fountain. A replica of the monument still stands in Saint Henri Square. 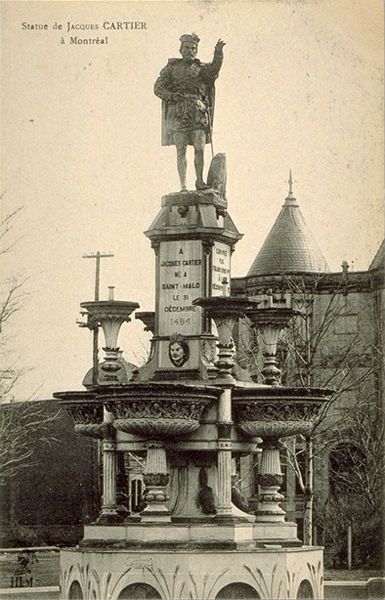