Daniel Hart, hailing from the United States latterly, was brought before the Recorder’s Court, on Saturday, charged with exhibiting for sale indecent pictures. About two years ago, he was brought before the Police Magistrate, charged with having counterfeit coin in his possession; on this occasion, also, indecent pictures were found in his possession. He was found offering pictures of the most revolting description for sale in McGill street. When brought before the Court, he affected to consider the pictures taken from his as but mildly offensive, and said he had others that were very much worse. Judge Coursol commented in strong terms on the conduct of the miserable wretch who did not deny the offence. He was sentenced to pay a fine of $20, together with the loss of his disgusting stock in trade, made up in packages with numerous duplicates of the various pictures. Captain Lamothe, on Hart’s being arrested, sent to the Hotel where he resided and seized a large number of pictures, which it is almost unnecessary to say, were of the lowest character. He had cards of a redeeming nature, so far as this community is concerned, in his possession, in the form of tickets for a passage across the Atlantic. It is understood that he will avail himself to the freedom thus granted to him without delay. 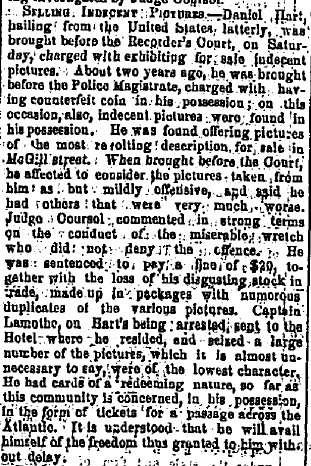 The monument to Jacques Cartier that could have been

City News – The Montreal Daily Witness Jul. 7, 1880 Yesterday a model for a monument which is proposed to…

New blood for the police force

City News – The Montreal Daily Witness Jul. 2, 1874 A policeman (a new arrival from France) in the Recorder’…