There is a decided flatness about business in Court house circles as well as on the markets. The only case of any interest in the Police court yesterday was that of Isidore Gauthier. The crime of which he stood charged was stealing a monkey from a dime museum on St Lawrence street and selling it to a rival concern. Durocher was remanded until to-day. Some time ago he was arrested for stealing from his employers, but they refused to prosecuted. 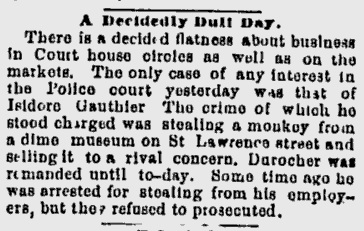