Among the passengers who arrived from Liverpool on board the Dominion line steamship Oregon, were some thirty young girls sent out under the auspices of the United British Women’s Emigration Association, and under the personal care of Rev. John F. W. Drury, diocesan secretary of the Diocese of Manchester. The girls came from all parts of England and Scotland, but chiefly from the Southern counties. The objects of the association are: To emigrate only such women and girls as are of good character and capacity. To select only such men and families as are suitable to the requirements of each colony. To secure for them proper protection on the voyage, and adequate reception on arrival. If possibly, not to lose sight of them for a year or two after their emigration. To raise a loan fund for necessitous cases, repayment being secured on detained wages, and the whole management of the society is under the supervision of some of England’s most prominent philanthropists. Rev. Mr. Drury has gone to Niagara. Meanwhile the girls are being provided with suitable situations as fast as openings offer. 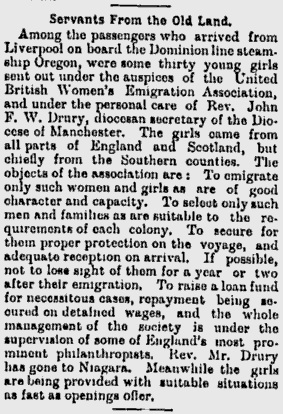 A drunk of tender years

A decidedly dull day – The Montreal Gazette Aug. 14, 1891 There is a decided flatness about business in Court…