Part of the floor in Viger Market has given way, leaving a dangerous opening in which strayed calves or lambs are likely to be engulfed at considerable risk to their necks and legs. The Market Committee should see to its being repaired at once. There is also a rickety looking brick building immediately adjoining the market grounds on the west side, which is inhabited at the present by a rather suspicious lot of females and others. On some occasions unearthly cries are heard to proceed from this building. The ground on which the building stands might be put to much better use if additional cattle pens were erected on it. 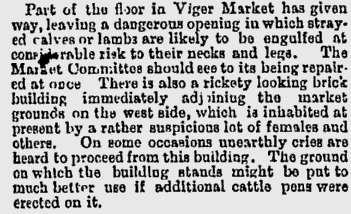 Thieves make off with sails

City and Suburban News – The Montreal Herald Aug. 3, 1889 A mean outrage was perpetrated at Valois on Wednesday…