As the passenger train from Cornwall was nearing Vaudreuil , this morning, the form of a man was noticed on the track walking in the direction of Montreal. The engineer immediately gave the usual whistle and put down the brakes, but all was of no avail. The unfortunate man appeared to be entirely ignorant of the danger which threatened, and never once turned to see if a train was approaching. The result was that the cowcatcher stuck him with considerable force, throwing him a considerable distance. When picked up he was almost unrecognizable, so terribly mutilated was he by the blow from the cowcatcher. The train was immediately stopped and the remains of the victim gathered together, when he was recognized as a deaf mute, known under the name of Poirier. This will account for his not hearing the whistle of the locomotive. An inquest will probably be held at Vaudreuil. 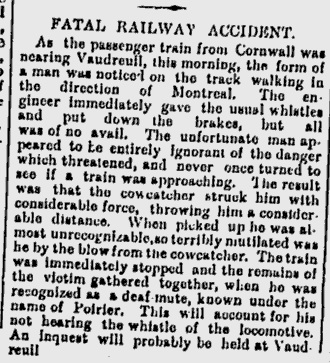 City News – The Montreal Gazette May 17, 1879 The electric light was displayed last night from the roof of…