The electric light was displayed last night from the roof of the Geological Museum, the motor being in the building, under the superintendence of Mr. J. Wilson, electrician, of this city and who has already fixed up the electric light in Craig’s furniture factory. The light was generated by a dynamic machine constructed by Mr. J A I. Craig, and was most powerful, radiating over the Champ de Mars, where the 65th Mount Royals and Prince of Wales’ Rifles were drilling. Small print could be easily read at the opposite end of the Champ de Mars, which was densely packed with an interested and wondering assemblage of citizens. 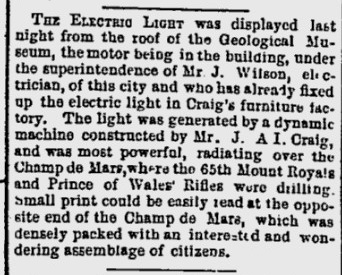 Deaf-mute man struck down by train

Fatal railway accident – The Montreal Daily Post May 14, 1885 As the passenger train from Cornwall was nearing Vaudreuil…