On Saturday evening two young men, named Joseph Brisbois and Joseph Madore, agreed to have a few games of pool. Enjoying themselves awhile, Madore began to get jolly with the effects of whisky, and while his friend was getting a drink he made off with his overcoat. Brisbois had a warrant issued for his arrest and on Monday Mr. Page took him in charge. They afterwards found the coat in a secondhand store, where it had been sold for $1. He was tried yesterday and sent to the city Police Court to be sentenced. 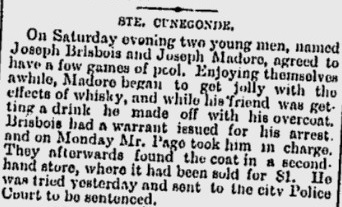 Lost wife and money – The Montreal Herald Apr. 10, 1890 A lumberman’s misfortune causes him to seek protection…

Inundation – The Montreal Gazette Apr. 9, 1827 On Wednesday afternoon, the water of the little river rose so high…