Yesterday was a hard day on horses. One had to be shot opposite 71 Visitation street in the morning, and at 1 o’clock Inspector Galey shot one that had fallen and broken his leg on Notre Dame street. The next case was at the corner of Ontario and St Lawrence streets, where a horse had fallen and broken its leg from being turned out of the street car track while going at a high speed. In this instance the killing was brutal, four shots having been fired into the animal, and then it was ten minutes before it died. 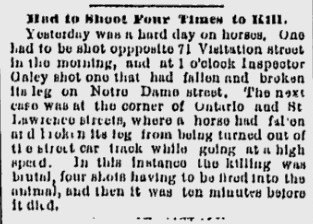