Yesterday noon some persons called on the Chief of Police Hughes and loudly protested against Lilly Clay’s variety show, which this week holds the boards at the Lyceum Opera house. The Chief, accompanied by Sub-Chief Kehoe, attended the matinee, and on his return to headquarters said: “I can see nothing out of the way there. I certainly remarked to the management that, perhaps, in two cases, a little more clothing might not be out of order; but, taking the show as a whole, I consider there nothing that can be said against its morality.” 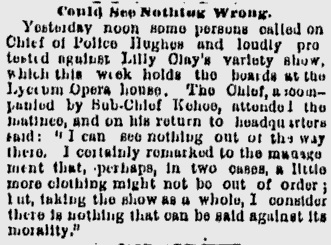 A taste of Texas cattle

A line must be drawn

Commissioners street as promenade – The Montreal Gazette Oct. 9, 1880 No doubt the electric light has made the line…