At Point St. Charles, on Sunday afternoon, some four or five hundred of the roughs of the city and suburbs gathered in rear of Forfar street to see a lacrosse match played. We cannot learn who were the players, but the noise and shouting were frightful. The field in which this game was going on belongs to the contractors who built the Grand Trunk Railroad, and who should leave some one in charge to prevent such desecration. The inhabitants of the vicinity in question, who are nearly all Protestants, were very much annoyed. There should evidently be an extra police-force placed at Point St. Carles on Sundays. 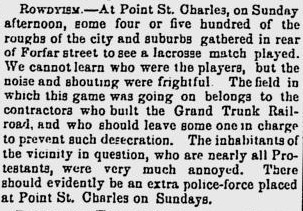 Inundation – The Montreal Gazette Apr. 9, 1827 On Wednesday afternoon, the water of the little river rose so high…

Selling hay that was not hay – The Montreal Herald Apr. 2, 1890 A farmer was yesterday arrested by High…