Constable Morrison arrested yesterday afternoon a party of about a dozen Italians with five bears and four monkeys and brought them to the Central Police Station. One of the bears had attacked a boy in St. James street, and but for the timely assistance of the Constable would probably have killed him. The policeman thereupon conceived the brilliant idea of arresting the whole crowd, but on promising to leave the city at once they were allowed to go. Half an hour later a party of Turkish gypsies with innumerable children packed on the backs of horses passed along Notre Dame street. Fortunately for them Constable Morrison was not on hand. 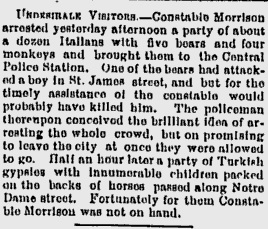 Unfeeling Conduct – The Montreal Gazette Jul. 23, 1878 As Henry Landry, a jail bird, was being taken from the…