It is now believed that the person who committed suicide by jumping into the river from the Molson Wharf, a few weeks ago, was Signor Baricelli, whose body was recovered last week. The unfortunate man, who was formerly bandmaster of the 60th Rifle band, and was well known by our citizens for his beautiful playing on the oboe, had, for some time, been observed in a desponding state, to which in all probability, the rash act is attributed. 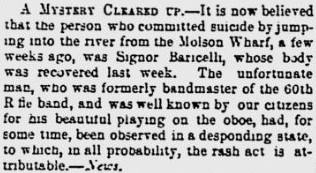 A (bad) actor gets busted