On Thursday afternoon a cow was observed in St. Lawrence Main Street at large, and apparently in an excited state. She entered the coffin store of Mr. Wray, and then proceeded down the street, charging at everyone, and at length assaulting Mrs. Large, wife of Mr. Large, hatter in that street, and breaking her leg. The infuriated animal then proceeded along Craig Street, and at length arrived in the garden of the French Square, where it continued to attempt to butt at persons outside the rails. The police were sent for, and Constables McOaul and Galvin went thither.

The animal made a furious charge at McOual, and was with much difficulty secured.The men then drove it towards the pound, but when they had arrived near Viger Square, the cow laid itself down, and it was impossible to get it to move further. Yesterday a truck was obtained by the police to convey the beast to the pound, those standing around assisting to place the creature upon it. Further assistance was obtained from the Police Station, and the animal at length lodged where it could no longer endanger the lives of passengers.

Yesterday morning a farmer appeared at the Police Station, and stated that he had delivered the cow to a butcher, who had commenced the slaughter of the animal in such a bungling manner, that after a blow had been given which did not have the effect in stunning the creature, it dashed out of the slaughter-house, maddened by the pain of the imperfect attempt to kill it. This explains the furious condition in which the creature was found. Constable McOaul deserves a great deal of credit for the courage and dexterity with which he secured the animal before it could set out on another race of destruction. 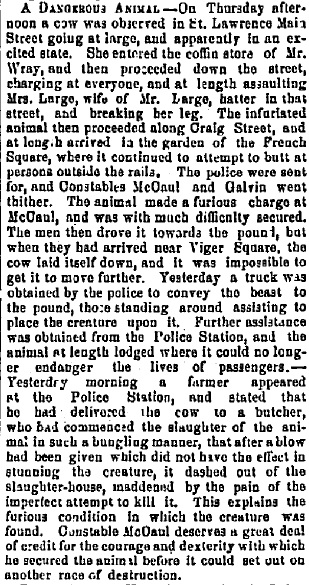 Can't be buried on a Sunday

Funerals – The Montreal Daily Witness Sep. 4, 1874 It is a breach of good taste which prevails here perhaps…

A drunk of tender years