Last spring during the stay of the H.M. 69th Regiment in Montreal, a girl about 18 years of age, named Lucy Hall, fell in love with private Geo. Potter, and when the regiment went to Quebec, the confiding girl followed shortly afterwards, and got a place as servant at one of the hotels in the ancient capital, where she could occasionally meet her lover. Affairs went on very quietly till about two weeks ago, when Potter applied to purchase his discharge, when it is said, his captain refused his recommendation, without which he could not procure it. A few days afterward Potter asked and obtained two days’ leave of absence, and with his sweetheart returned to Montreal, and took up his quarters at the residence, in the Quebec suburbs, of his intended mother-in-law, where he remained over his leave several days, preparatory to getting married and crossing the lines to the United States. Unhappily for Potter, he was arrested last Friday, by Sergt. James, of the “Look-Out Party,” and sent to Quebec to be court-martialled, which the young woman, Lucy Hall, was arrested for aiding a soldier to desert. Her trial here will take place to-morrow. 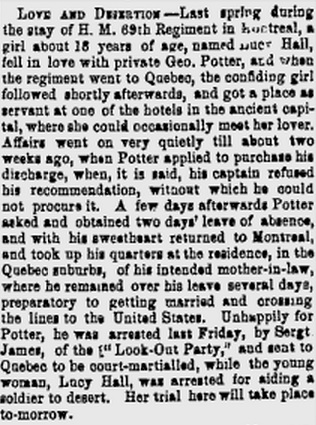 Unrequited love and a kick to the leg

Expensive Kiss – The Montreal Gazette, Feb. 12 1878 Leander Bourgoin, 17, was brought before the Recorder yesterday and fined…

All the latest styles