At 128 St. Elizabeth street, near the corner of St. Catherine, is located a small stone house, kept by a woman named Harriet Daniels, and according to the reports of the neighbors and the police, it bears a very unenviable reputation. Midnight brawls and robberies are the general characteristics of the den. Some steps should be taken to close the place up. This woman appeared in the Police Court yesterday morning, to lay a charge against a young man named Belisle for robbery, while the latter says that the woman herself is the guilty party. The case will be sifted shortly. 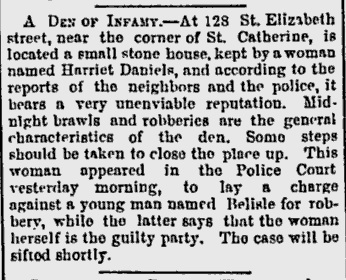 Two hearts that beat as one – The Montreal Gazette Dec. 17, 1879 A young couple from Burlington registered their…