A man named Joseph Gautier who was sent to Beauport as insane a few months ago, escaped from that institution and came to Montreal on the 8th of October. He was sent to Beauport, when about to be prosecuted for obtaining goods by false pretenses, having manifested such signs of insanity as warranted his removal to that institution. Not relishing treatment for insanity he left surreptitiously. Information of the fact was sent to Montreal and Detective Goallier was detailed to hunt him up and found him working steadily and apparently quite rational. On being brought before the authorities, his insanity feigned or otherwise, again appeared. It is thought that he is shamming. He will, however, be sent to Beauport. 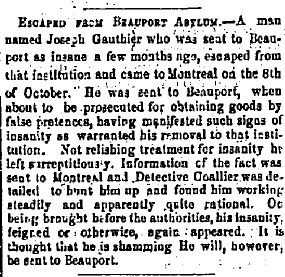 Sleigh bells wanted – The Montreal Daily Witness Nov. 22, 1879 Now that winter has come upon us and sleighs…