(To the Editor of the Witness)

Sir, -- There have been, in the past few weeks, over 40 sheep and lambs destroyed in one locality on the North River, in the district of Terrebonne county of Two Mountains. Can there not be an effectual remedy to obviate this evil? There surely can be, in the existence of a law offering a good round bounty for the scalp of every dog killed while running at large without his master. Persons having good dogs would keep them kennelled up, especially at night; and poor dogs are better killed off than running at large. A vast tract of country, compromising Argenteuil, Terrebonne, and other counties in Quebec province, are especially adapted for sheep-raising, and roving dogs are the greatest obstacle in the way. Will not the Local Legislature pass a stringent protection against dogs, or a law something like the above? We express the wishing of many farmers, especially in Argenteuil county, when we set forth this thought, we venture to say. Will not the local member from the last-named county confer a great favor on his consutuency [SIC] by the introduction of something of the kind? Permission to kill stay dogs is not enough; a heavy tax will not do; but a bounty for the scalp of the marauder will have the desired effect. Who will move the matter?
L.F. 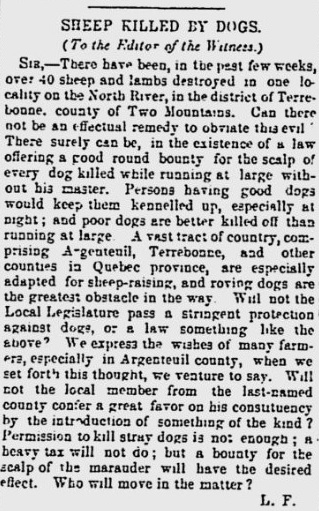