He attempts to commit suicide and escapes from the general hospital.

Some time ago a man named Bernard Kerr, residing on King street, awaited his opportunity and drew a carving knife across his throat. He inflicted a severe gash, and was about to repeat the act when he was caught and prevented from committing the deed. Medical assistance was obtained and, with the greatest attention, the unfortunate man was saved. A few days ago he was removed to the General Hospital suffering from a disease. Yesterday, in an unaccountable manner, he effected his escape from the institution, and, half dressed, ran along Dorchester street, shouting and screaming and scaring the pedestrians. A constable happening to be around captured Kerr, brought him back to the hospital and thence to Central Station. He was examined by a physician, and yesterday evening sent down to Longue Pointe as an incurable lunatic. 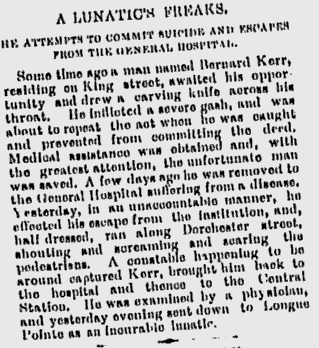 Boys dredge up a surprise

City News – Montreal Daily Witness Apr. 29, 1878 A box containing a human skeleton was fished out of the…

Sabbath-Breaking – The Montreal Daily Witness Apr. 20, 1868 Yesterday afternoon, a parcel of boys were playing lacrosse in the…