As Mr. Drew, Clerk of the Cattle Market, was weighing a load of hay on Saturday his attention was called to what seemed to be the arm of a man protruding from the hay near the top of the load. The owner of the load, when asked for some explanation, said it was only a coat, but this not satisfying Mr. Drew, an officer was called, and upon examining the load he found a man carefully concealed in the top, covered by the hay. He said he had been hired by the vendor to “allow himself to be weighed.” 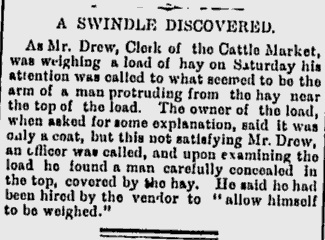 Brought up in houses of ill repute

Incorrigible – The Montreal Gazette Jan. 6, 1880 Frederick Hartly, a youth of ten summers, was brought up yesterday at…

A shocking incident – The Montreal Daily Post Dec. 5, 1885 A shocking story comes to hand from the county…